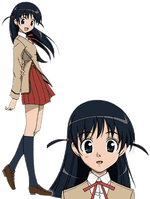 Tsukamoto Tenma is the first character that School Rumble introduces.

Even though she is presented as the main character at the beginning of the series, she gradually falls into a supporting role towards the end of Season 1. She is nevertheless, an important character in School Rumble, and one of the most popular among the fans. Short, undeveloped and childish for her age, Tenma often is mistaken as being younger than her classmates and her younger sister Yakumo. She does not believe herself to be very pretty in the eyes of boys, even though most of them admit that she's cute. She strives to be seen as a woman.

Her mood and emotions are always expressed openly with every part of her being, including her hair which she leaves down, except for her two antennae-like pigtails which move by themselves according to her current mood.

Mostly bi-polar, she tends to be extreme with her emotions, making a big drama out of any little event in her life.

Tenma’s most notable talent is impersonation. Whenever she gets carried away by her wild imagination and occurrences, she can actually become someone else and incorporate the traits and abilities of that particular personality. The Archer in episode #3 and the Pitcher in episode #5 are good examples of this.

Even though it’s only shown briefly in episode #5, Tenma appears to actually be good at Judo or some similar martial art, as she easily threw Harima to the ground when they first met.

Tenma also seems to have some telekinetic ability. She was shown bending spoons with ease after failing an ESP test with Zener cards. This was commented on at least one other time in the series. Also, she is able to converse with a spirits. She and Yakumo appears to have been born into a psychic bloodline.

Even though it’s still a mystery how she came to fall for him in the first place, it is clear from the very beginning and up until now, that Tenma only has eyes for him and no one else. This “blind love” makes her oblivious to the undeniable fact that Karasuma’s weirdness is more than out of the ordinary, and also keeps her from noticing all of Harima’s failed attempts to express his love for her.

Tenma lives with her sister, Yakumo Tsukamoto. The sisters appear to be living alone together as their parents have never been seen or mentioned. It has also been mentioned in Episode 1 of the 2nd Term by Tenma that "they only have each other". Whether this was metaphorical or literal is uncertain.

Tenma is best friends with Mikoto, Eri, and Akira, and she often meets up with her friends after class in the Cafe Erukado, where her sister, Yakumo, works.

Community content is available under CC-BY-SA unless otherwise noted.
Advertisement