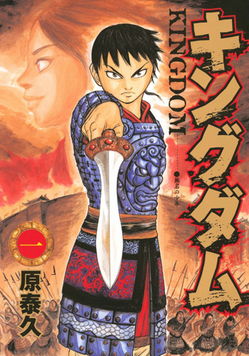 "Kingdom" or キングダム is a Japanese manga work by Yasuhisa Hara. The serialization has been continuing since the 9th issue of 2006 in "Weekly Young Jump" published by Shueisha. It was awarded the 17th Tezuka Osamu Cultural Award and the total number of copies issued from 1 to 49 is over 33 million copies [1]. A total of eight radio dramas were broadcast in 2008 by Shueisha's "VOMIC". The game for PSP was released from Konami in November 2010 and a TV animation was announced in November 2011, and the first season of the series was broadcast from June 2012 to February 2013, and the second season was broadcast on NHK BS Premium from June 2013 to March 2014. Both series were also rebroadcast on NHK General. A live-action film was announced in commemoration of the achievement of the 50th volume in April 2018 [2], and the theater was released in April 2019.

Shin of the Hi Shin Unit. 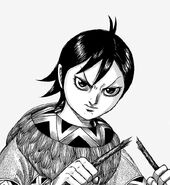 Add a photo to this gallery

"Pride Nothing's Carved in Stone" Kingdom OP FULL
Add a photo to this gallery
Retrieved from "https://manga.fandom.com/wiki/Kingdom?oldid=93927"
Community content is available under CC-BY-SA unless otherwise noted.