Cover of Volume 1 as published by Shodensha

Bunny Drop (うさぎドロップ Usagi Duroppu?), also known as Usagi Drop, is an ongoing Japanese josei manga series by Yumi Unita.[1] It has been serialized by Shodensha in the manga magazine Feel Young since October 2005, and collected in seven wide-ban volumes as of February 2010[update]. It depicts the struggles of a bachelor, named Daikichi, commited to raise a young orphan, Rin, who is the illegitimate daughter of his grandfather. Part one takes place when Rin is six years old, while part two begins ten years later. It has been licensed in English by Yen Press.[2]

When 30-year-old Daikichi returns to his home for his grandfather's funeral, he meets an unfamiliar child in the garden. His mother explains to him that Rin is his grandfather's illegitimate daughter by an unknown mother. The girl is an embarrassment to all his relatives and nobody wants to take her in because of the scandal. Annoyed by his family's attitude, Daikichi decides to take care of Rin himself, even though he is single and has no experience raising a child.

The manga series is divided into two plots. The manga jumps forward in time with volume 5, shifting its focus from Daikichi's struggles to Rin's own adolescence.

In an interview, Yumi Unita stated that while some of Rin and Daikichi's experiences are based on her own, most of the story is her own invention, inspired sometimes by her reading or discussions with friends.[3]

Usagi Drop is written and illustrated by Yumi Unita. It has been serialized by Shodensha in the monthly josei (aimed at younger adult women) manga magazine Feel Young since October 2005. Part one, which is collected in the first four volumes, concluded in the April 2008 issue, with part two (which skips ahead ten years) beginning in the next issue. Serial chapters have been collected in seven wide-ban volumes as of February 2010[update].[4]

The series has been licensed in English by Yen Press[5] and in French by Delcourt.[6]

The anime series has 11 episodes and 4 specials. All take place during the early years of Daikichi's and Rin's life together. The anime covers the same information as the first 4 manga volumes. 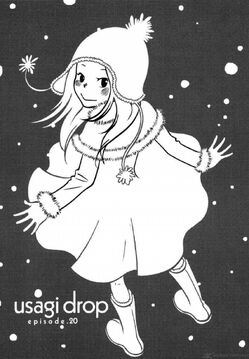